Cook for 6-8 hours on low, or 3-4 hours on high, or until the squash is completely tender and mashes easily with a fork.  Remove and discard the sage.  Stir in the coconut milk.

Use an immersion blender to puree the soup until smooth.  (Or you can transfer the soup in two batches into a traditional blender, and puree until smooth, being very careful when working with the hot liquid.)  Taste, and season with additional salt, pepper and cayenne if needed.

Heat oil in a large pot over medium-high heat and rub roast with salt and pepper. When very hot, carefully place roast in pan and sear on all sides. You’re not cooking the meat, you’re just browning it quickly on all sides to add flavor and seal in the juices. Oh, and it smells so good–just like Grandma’s house on a Sunday afternoon.

Place in crockpot and sprinkle with onions soup mix. Pour water and beef broth over roast. Cook 8-10 hours on low or cook 4-5 hours on high and another 3-4 hours on low. It’s hard to screw this part up; basically, the longer it cooks, the more tender it will be. But you know it’s done when you pop a fork in it and the meat just falls apart. When meat is ready, shred with a fork.

Place meat in crusty rolls. Top with cheese and broil open-faced in the oven or toaster oven for a few minutes, until bread is golden and cheese is melty. And don’t even think about walking away–things can go from lightly-toasted to on fire within a matter of seconds when you’re using your broiler. Ladle juices into small cups for dipping and enjoy!

Combine chicken stock and coconut milk in a large pot and turn on to medium heat. Add in fish sauce, curry paste, oyster sauce, lime juice, sriracha, and ginger paste. Bring to a simmer. Add in sliced peppers, carrots, and chicken breast, and turn up to a medium-high heat. Bring to a boil. Let boil 4-5 minutes, turn back down to medium. Let simmer 30 minutes until flavors meld and chicken is cooked through. Garnish with cilantro and fresh lime.

Cook pasta shells for half the cooking time; make sure not to overcook. Drain and rinse in cool water. Set aside.

Heat olive oil in large skillet or dutch oven over medium-high heat. Add onions and garlic and saute for a minute or two. Add Italian sausage and brown, breaking it up into small pieces as it cooks. Pour in red wine and let it cook for a minute or two.

Pour in cans of crushed tomatoes and stir. Add sugar and salt. Bring to a boil, then reduce heat to low. Cover and cook 30 to 45 minutes, stirring occasionally. Check for seasonings; can add crushed red peppers if you like a little heat.

In a separate bowl, mix ricotta, half the Parmesan, Romano, egg, salt and pepper, basil, and 2 tablespoons parsley. Stir until combined.

To assemble, coat the bottom of a baking dish with sauce. Fill each half-cooked shell with the cheese mixture. Place face down on the sauce. Repeat with shells until cheese mixture is gone. Top shells with remaining sauce. Sprinkle on extra Parmesan.

Bake at 350 degrees for 25 minutes, or until hot and bubbly. Serve with crusty French bread.

Preheat the oven to 350° F. Lightly grease a baking sheet with cooking spray. Clean mushrooms with a damp paper towel. Carefully remove the stems from the mushroom caps, setting the caps aside for later. Add the stems to the bowl of a food processor. Add the garlic to the food processor as well, and pulse in brief bursts until them mushroom stems and garlic are finely chopped.

Heat the oil in a large skillet over medium heat. Add the chopped mushroom stems and garlic and cook until all the moisture has disappeared, about 5-7 minutes. Lower the heat to medium-low. Stir in the cream cheese, Parmesan cheese and spices. Stir together until the mixture is smooth and creamy; remove from the heat. Using a small spoon, fill each mushroom cap with a generous amount of filling. Arrange the mushroom caps on the prepared baking sheet. Top with bread crumbs, if desired. Bake for 20 minutes or until the mushrooms are hot and liquid starts to form under the caps. Transfer to a serving platter, garnish with fresh herbs if using and serve immediately.

To make the crepes, combine dry ingredients, then add wet ones. Spray a medium frying pan with cooking spray a heat over medium-high heat. Pour batter into frying pan, using approximately 1/4 cup for each crepe. Cook about 2 minutes, until the bottom is light brown. Loosen with spatula, flip and cook other side.

To make the sauce, preheat a frying pan over medium heat. Melt the butter in the frying pan, then add both containers of fruit. Add the sugar and cook until raspberries are mostly dissolved and sauce is bubbling slightly.

When you are ready to assemble the crepes, spread a thin layer of the sauce over each crepe and top with a spoonful of whipped cream.  Roll up the crepe if desired and serve immediately.

Preheat the broiler.  Place the bell peppers on a baking sheet.  Broil, turning occasionally, until all sides are partially browned and bubbling.  Remove from the oven, transfer to a bowl, and cover with plastic wrap.  Let rest for 15-20 minutes.

Remove the peppers from the bowl and peel away the skins.  Remove the stems and seeds from the peppers, and slice thinly.  In a bowl or other container, combine the sliced peppers, olive oil, garlic, and red pepper flakes.  Refrigerate and let marinate for at least 3 hours.

When you are ready to assemble the crostini, preheat the oven to 400˚ F.  Lightly brush baguette slices with olive oil.  Place on a baking sheet and bake until light golden and crisp, about 3-5 minutes.  Remove from the oven and rub the cut side of the garlic over the top of each baguette slice.  Spread a thin layer of the goat cheese mixture over each baguette slice and top with a spoonful of the pepper mixture.  Sprinkle with minced fresh herbs, if desired.  Serve immediately.

*Note: Age egg whites by placing egg whites in a bowl and covering with plastic wrap. Pierce small holes in the wrap and place in the fridge for one week. Allow the egg whites to come to room temperature before using.

Add egg whites to a mixing bowl and, using a mixer with whisk attachment, whip the egg whites until white and frothy. Add sugar and cream of tartar in three additions, mixing each addition until incorporated, and whip to stiff peaks.

Remove the bowl from the mixer and place on a work surface. Add the almond mixture to the egg white-sugar mixture in three additions by folding each addition with a spatula until incorporated. Add the food colouring at this time, if desired. Once all almond flour is added, continue to fold the batter until it reaches a desired piping consistency. The batter show flow like magma when folded.

Allow the batter to dry at room temperature for 20-40 minutes or until a skin has formed around the batter. This can be tested by gently touching the batter with your finger.

Once the batter is dry, bake for 10-13 minutes at 325 degrees F. The baking conditions are different for every oven. It may take some trial and error to get the right conditions.

Once baked, remove from oven and allow the macarons to come to room temperature before removing them from the baking sheet. The macarons are ready to be filled. 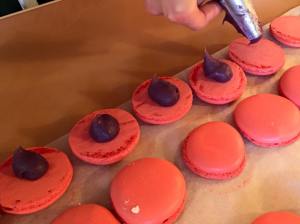 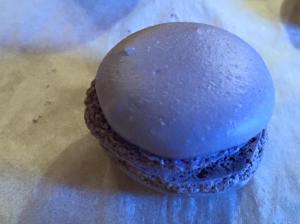 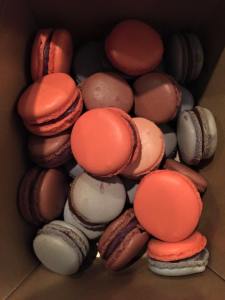 Heat a 10- or 12-inch skillet (preferably cast iron) over medium heat for 5 minutes. Meanwhile, beat the egg lightly in a shallow pan or pie plate; whisk in the melted butter, then the milk and vanilla, and finally the sugar, flour, and salt, continuing to whisk until smooth. Soak the bread without oversaturating, about 40 seconds per side. Pick up the bread and allow the excess batter to drip off; repeat with remaining slices.

Adapted from The New Best Recipe

Adjust an oven rack to the middle position and heat the oven to 425 degrees.

Melt the butter in a Dutch oven over medium-high heat. When the foaming subsides, add the onion and cook, stirring occasionally, until soft and lightly browned, about 4 minutes.

Add the garlic, thyme, salt, and pepper and cook until fragrant, about 30 seconds. Add the potatoes, broth, cream, and bay leaves and bring to a simmer. Cover, reduce the heat to medium-low, and simmer until the potatoes are almost tender (a paring knife can be slipped into and out of a potato slice with some resistance), about 10 minutes. Discard the bay leaves.

Transfer the mixture to an 8-inch square baking dish (or other 1 1/2 quart gratin dish). Sprinkle evenly with the cheese. Bake until the cream is bubbling around the edges and the top is golden brown, about 15 minutes. Cool 10 minutes before serving.